After Antigua, we booked a shuttle to Panajachel, a town alongside Lago de Atitlán.

The lake itself it surrounded by three volcanos, all of them majestic. The town we stayed in (Panajachel) was filled with street vendors and cute comedores. We arrived in Pana in the morning, with empty bellies so our first mission was to find food.

Example #1 of great food in Guatemala. This place was called Jasmín Deli, and the dish above was the standard desayuno chapín (Guatemalan breakfast).

After filling out bellies, we went in search of a place to stay. After turning down a really nice but expensive hotel, we found one we thought would be a good fit. We were wrong. Our room smelled like sewage, no hot water (they said they had it), and it was right next to a chicken coup (roosters crow at all hours of the night). I had been prepared for an experience like that but still. Even their in-house parrot had it in for me. Regardless, it gave us even more reason to be outside and explore the town.

Again, lots of street vendors with beautiful things to sell. The textile market in Guatemala is incredible. There are beautiful fabrics and material all over the place; however, it can be a bit overwhelming. Everyone wants you to buy their things and the constant bombardment of vendors can be draining.

The next morning, we got up early so that I could go on a photowalk while the streets were still quiet and so that Chris could do a workout next to the lake. It’s a complete different place when there aren’t a lot of people. It’s tranquil – almost serene.

The only way of traveling from village to village is by boat, apparently, there is no road that circles the lake. These boats (lanchas) are incredibly cheap though never run on time.

The volcanos really do serve as an incredible backdrop. You almost wouldn’t know that they were there, especially if it’s a foggy day. Later that same day, we went on a mountain-bike tour that ran along the lake (hills, towns, fields included). Our tour guide, Rogerio, made the entire ride look easy, while I was sweating and panting like a dog any time we hit an ascent. We went through several towns and were able to witness what non-tourist Guatemala was like. 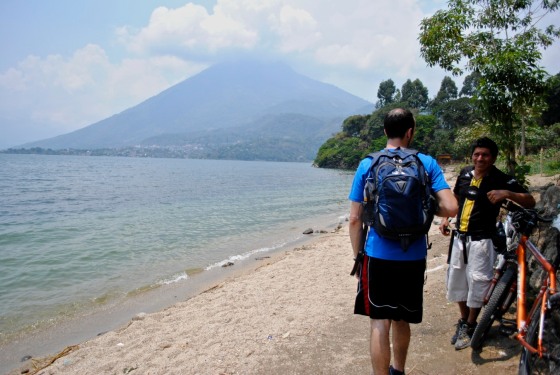 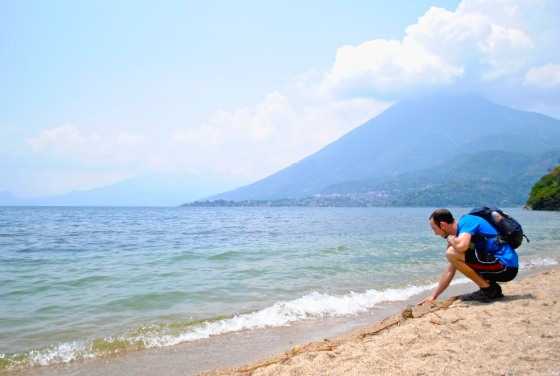 While recovering from our grueling mountain biking experience, we heard drums outside and (of course) had to investigate. There were two secondary schools holding a parade to celebrate an anniversary of some sort. We just watched them warm up but it was fun seeing the kids enjoy themselves. 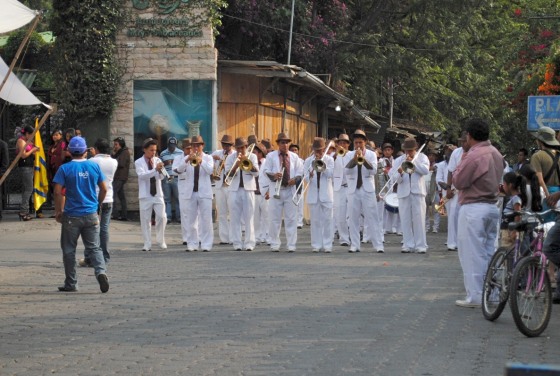 The morning before we left Panajachel for Quezaltenango (Xela), we explored the north side of town, which included the church below. Nearby, we found a fantastic coffeeshop called CrossRoads Café. The space was really tiny but it made up for it in atmosphere. (I’m currently drinking coffee that I bought there). It was a nice send-off into our next location.

Crista (my godmother) dropped us of in Antigua so we could commence our backpacking journey. Antigua was really adorable with lots of church ruins, restaurants, shops, and tours. Its backdrop is also a volcano. The most beautiful part of Guatemala is definitely its natural environment – you’re never too far away from mountains, volcanos, lakes, rivers, or jungles. 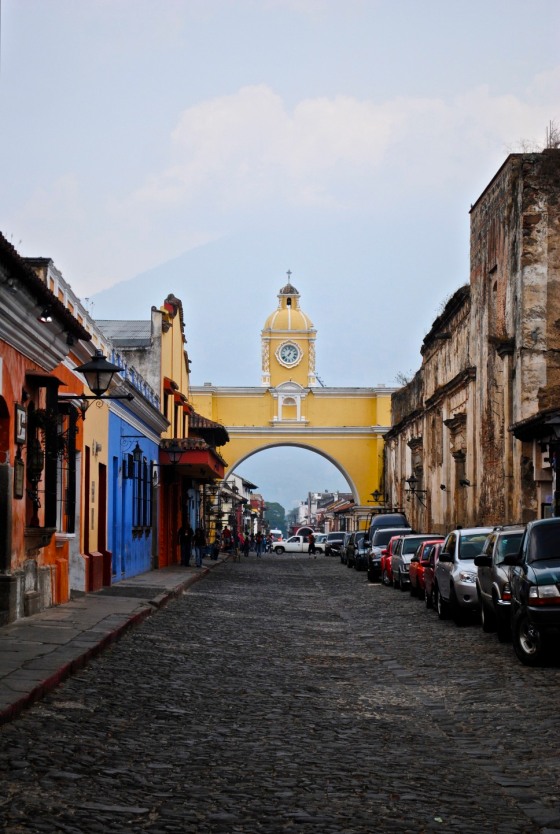 Probably the most unassuming volcano ever. Yeah, that slight hint of a slope right there, what you thought was just sky? Nope, that’s a volcano.

One of the many churches we visited. Most had been hit by earthquakes and were eventually deemed nonfunctional and now serve as museums.

Of course, Chris had to climb everything. 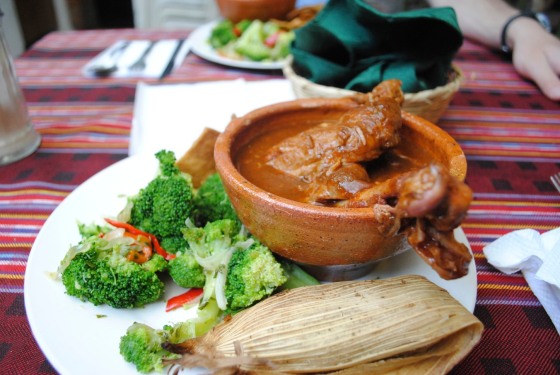 One of the first meals in Antigua – this platter was incredibly filling: cooked veggies, chicken stew, some guacamole and a side of tamales. And the corn consumption commences!

Every church we passed had an incredible presence, just like they had originally been designed to have.

A cute little park with a great view of the volcano. We went running our second morning in Antigua and stopped by here to do some squats. Yes, we were doing squats in Guatemala. The locals gave us funny looks. 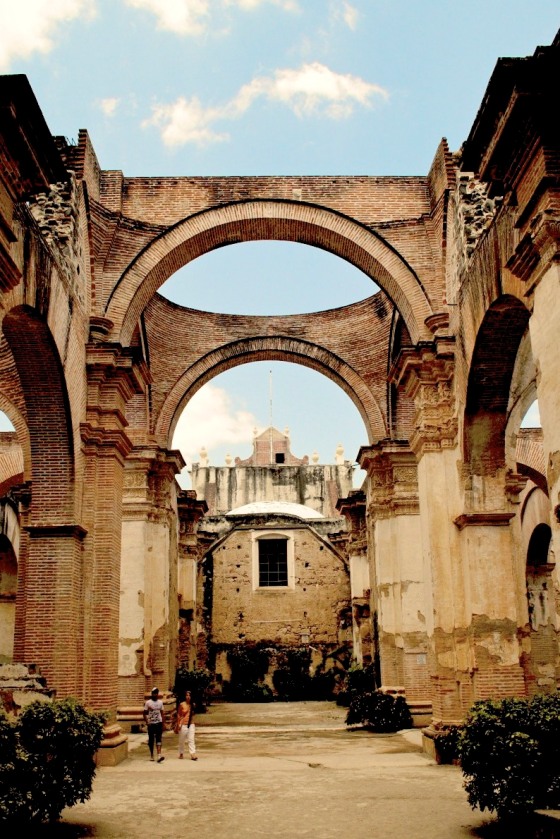 This was probably my favorite church ruin – it’s the Catedral de Santiago. Completely ominous with huge pillars just sprawled as if the 1773 earthquake that wrecked had occurred recently.
Later that second day (after we both got sick with Traveler’s Disease) we somehow managed to gather enough energy to go hike Volcano Pacaya. Pacaya actually recently erupted in May 2010 so it’s very much still active. The ascent took about an hour and a half, maybe two, with a straight shot up. It was exactly the kind of physical activity I needed. The end result was amazing.

It felt like we were on top of the world.

The clouds would hide everything around us and then clear off and show off a spectacular view. That’s the crater of the volcano. 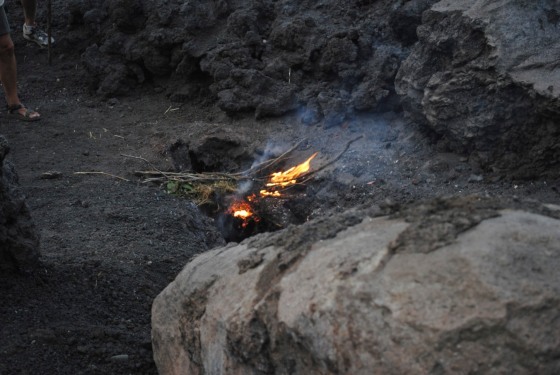 Once we got closer to the crater, the ground became considerably hotter. At some points I felt like my shoes were going to melt off. Our tour-guide placed some sticks and branches on top of a small opening and it soon went up in flames. [Anyone seen Volcano, the movie with Tommy Lee Jones? That scene in the train tunnel where the guy jumps into lava to save the passenger? Yeah, I kept playing that in my head.]

Sunset on top of a volcano.